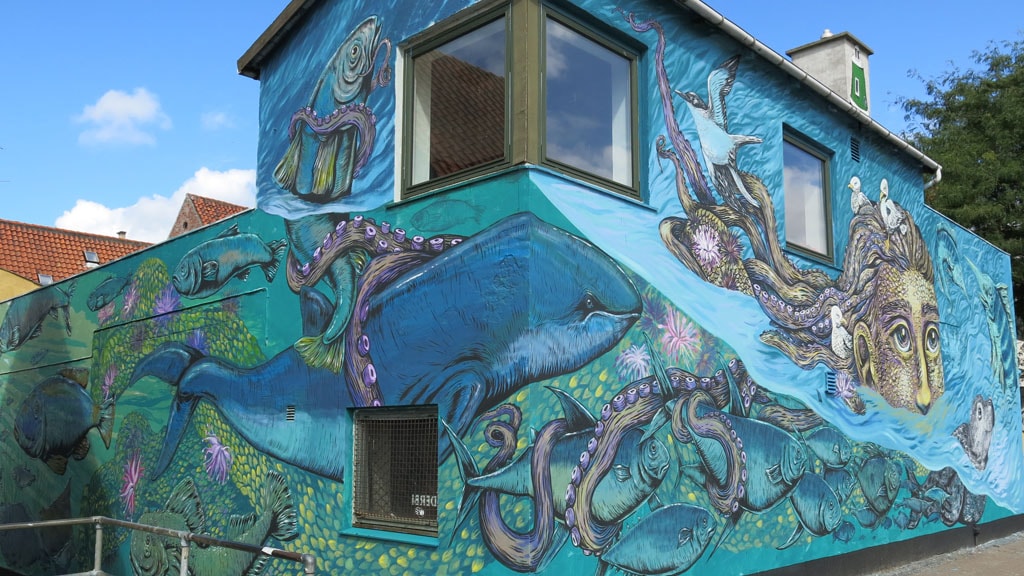 Murals in Helsingør - Life in Øresund

"Life in the Sound" is the theme of a large, poetic mural and a colourful humorous fish, created from scrap and marine waste.

At Helsingør bus terminal, you can see a lovely mural in blue shades that tells of a world under the sea with poetry and mystery. On the King’s Quay stands a large, colourful and humorous fish, made ​​entirely of waste, the sea has washed up on the beach.

Both works of art are the fourth and final part of Kunst & Byrum’s  (Art & Townscape)  project with art in public spaces in Helsingør. Under the theme "Life in the Sound" artists have created works in collaboration with the aquarium Øresundsakvariet.

The fish is created by the Japanese artist group Yodogawa Technique supported by a group of volunteers,  from scrap from the dump and the shores around Helsingør.

You can see murals 3 other places in Helsingør:

"The Sound Dues" is depicted  on the gable of Sct. Anna Gade 4, just off the Cathedral of Sct. Olai

"The Shipyard Era" is depicted in two large murals at Allégade 7 and Kongensgade 23, just opposite the gate of the original Helsingør Shipyard, today the Culture Yard.